Plan B was more than just ignorant about his T-Shirt, whether or not people like it a skinhead has become an identity for a political idealism. I am not saying it is right but thats the way it is. You watch the expression on most people face when they see a skinhead, they now what it stands for and for anyone to think that they aren’t portraying that message is ignorant. 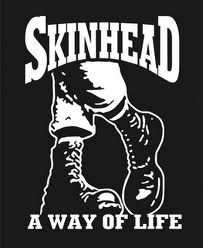 Yes you should be able to dress as you want but you also have to accept the ramifications that come with that. Why would anyone want to dress in a manner that would put fear or terror into people. Skrewdriver were/are an extremist band but there are also more ‘acceptable’ bands that have done nothing to dispel the myth. Madness will never denounce racism defending their position by stating that if skinheads or racists like there music then it doesn’t mean they are.

Plan B is simply niaive and by accepting that he made a mistake with the T-shirt he admits that he isn’t aware of the history that engulfs that fashion. I didn’t live in America through the civil rights period but I am aware that the Ku Klux Klan isn’t just a fashion for anti socialism and anti liberilsm – it stands for something. The 50’s/60’s skinhead died in the late 70’s/80’s. Wherever you see a skinhead movement, NF/BNP/Combat 18/EDL are not a million miles away.