You thought he was a right wing extremist, well you obviously misunderstood Tommy Robinson. Apparently his is an advocate of a mixed Britain just denouncing Islamic extremism; people are still trying to work out what bandwagon he is jumping on?

Stephen ‘Tommy Robinson’ Yaxley-Lennon’ announces his departure from the EDL due to it becoming overrun with right wing extremists, and he couldn’t control it. Funny that, a group hell bent on intimidating the Muslim community wherever their vile racist thugs were allowed to march, attracting the wrong sort of people; especially as Yaxley-Lennon took the name ‘Tommy Robinson’ after a notorious Luton Town football hooligan. Next Peter Thatchell will accuse Stonewall of attracting gay people!

This simply smacks of Robinson trying to enter into a legitimate political role. Nick Griffin and the BNP are politically dead so in a way we should congratulate Robinson for stepping up to fill that abhorrent void.  Backed by the fact he has been in consultation with the Quilliam Group, he (with henchman Kevin Carroll) announce they simply want to make a better Britain, with violence not being on the agenda.

Why lead an extremist army, getting arrested all the time, when you can join UKIP (or like) and get paid for expressing the same views? 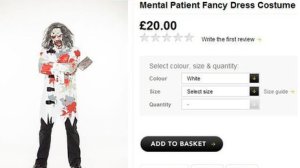 What about Asda (Walmarts) policy on unions and part timers, what about Tesco forcing farmers prices down so low farms are going out of business, what about loss making pricing to force local competition to close down; I find this far more offensive.

Horror films create the stereotypes and halloween allows people to imitate them. If they 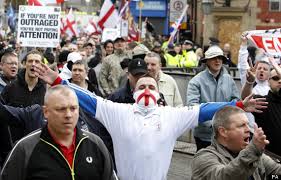 are going to ban anything what about jeans, red braces, and fred perry T-shirts, hair clippers, yes you too can dress like a right wing thug and poor bile into the country but that’s freedom of speech – give me a stereotyped halloween costume any day, its less frightening.

You’ve got to love the liberals and their ‘do-gooding’ ways.

You can imagine it now, an elderly couple looking over the table at each other, remember the day we got married, when 700 ignorant racist fascists turned up shouting idiotic abuse about people who have just as much right to be in this country as we do.

Yes dear, I do, what a bunch of cunts!

The EDL turned up in force (700 ha!) in Manchester to spread their vile hatred and abuse. I am English and proud of it and you certainly do not represent me or the majority of this country. I knew people like this when I went to school and they were just as hateful and despised then as they are now. The EDL might as well change there names to the PFL – ‘People without friends league’!

Nick Griffin is not a nice man, he is the type of man that nobody would shed a tear for if he were to spontaneausly combust. In fact noone would even piss on him if he was on fire. He is simply trying to raise his media profile as nobody is interested in anything he has to say anymore – and that includes the EDL.

How dare he publish Michael Black and John Morgan address and suggest that people demonstrate outside; a couple are a couple no matter what the combination of the sex. Again this is another case where religion has proven that it is simply self serving and not for the good of any society.

I bet Nick Griffin is a regular church goer – but then again so are the KKK.

The English Defence League have suffered a humiliating defeat whilst trying to ‘take back their streets’ in Walthamstow, east London as thousands of locals turned out to block their march with a sit down protest and occupation of the protest area. The sit down protest was organised on the #wearewalthamforest hashtag on Twitter.

Or an alternate title would be is how to make friends and influence people.

The rise of the right is persistent if nothing short of pathetic. Anyone watching Jamie Reids London modern Babylon will see how multicultural London is – full of Londoners. Ethnicity is generations old that people are simply Londoners no matter what the colour of their skin.

It is the EDL that are an anomaly, a minority in the mix of everyday Londoners.

We moved back to London so our children didn’t grow up with views like that of Gary Rogers! See his comments on the following website:

Plan B was more than just ignorant about his T-Shirt, whether or not people like it a skinhead has become an identity for a political idealism. I am not saying it is right but thats the way it is. You watch the expression on most people face when they see a skinhead, they now what it stands for and for anyone to think that they aren’t portraying that message is ignorant.

Yes you should be able to dress as you want but you also have to accept the ramifications that come with that. Why would anyone want to dress in a manner that would put fear or terror into people. Skrewdriver were/are an extremist band but there are also more ‘acceptable’ bands that have done nothing to dispel the myth. Madness will never denounce racism defending their position by stating that if skinheads or racists like there music then it doesn’t mean they are.

Plan B is simply niaive and by accepting that he made a mistake with the T-shirt he admits that he isn’t aware of the history that engulfs that fashion. I didn’t live in America through the civil rights period but I am aware that the Ku Klux Klan isn’t just a fashion for anti socialism and anti liberilsm – it stands for something. The 50’s/60’s skinhead died in the late 70’s/80’s. Wherever you see a skinhead movement, NF/BNP/Combat 18/EDL are not a million miles away.

The Jubilee is over, the flags are now redundant but they will be replaced as Euro 2012 is nearly upon us. St George’s Flags in abundance, pledging our loyalty to a team that has alwys failed to deliver. Take away the football aspect, and the plethera of the red cross on a white backgroung strikes fear in many people. The EDL tried to counter the Republic demo but failed (see Ian Bone’s Blog).

Although the Union Flag (it’s only the Union Jack when on a ship) doesn’t appear to hold the same racist statement that it did in the late 70’s it has conveniently been replaced by the George Cross. The flag means nothing but support for my country I hear you cry, but there has always been an undercurrent of racism within football just waiting to have a voice. Whenever the streets and cars become emblazened in the red and white flags it appears to give a mandate to the EDL – who are very nice people, simply passionate about their country!

Whilst the Jubilee and all it’s flags looked ‘so quiant’ to many, the same can’t be said about a sea of England Flags. You may not agree that it all smacks of jingoism, a time yearning back to the crusades, but next time the EDL march (or remain static in a kettle) just look at what flag they wave.

Croydon hits the headlines again with something that the English Defense League would be proud of. The poor child sat on this vile woman’s knee not really understanding what is going on. Will he turn out to be as ignorant as the woman whose knee he is sat on (I do hope it’s not his mother), or will he leave home as soon as possible and disown her.

There is no excuse for such ignorance in our modern times, especially in London (John Terry excluded); I know lots of people who struggle on what money they have but they doen’t resort to Daily Mail style views. In this child’s case I hope nature wins the battle against nurture.